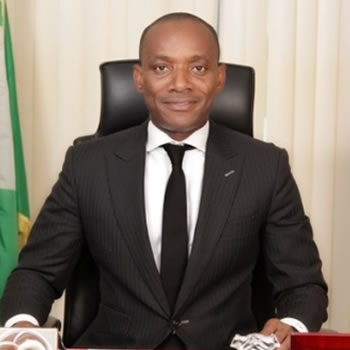 Dr Sam Amadi is the former Chairman of the Nigerian Electricity Regulatory Commission (NERC). He was a fellow at the Care Center for Human Rights Policy at the Harvard’s Kennedy School of Government. Until December 2010, Mr Amadi held the position of Special Adviser to the President of the Senate of Nigeria, Director of the Centre for Public Policy and Research in Lagos, Nigeria and Senior Legal Officer at The Human Rights Law Service in Nigeria. He is a member of the Nigerian Bar Association.

He was a Senior Counsel at Gani Fawehinmi Chambers from 1993-1995, and an Associate with Olisa Agbakoba and Associates from 1995-Present. He was also part of the Defence Counsel to Ken Saro-Wiwa, an author and environmentalist who was killed by the Nigerian military.

He holds a doctoral degree of law from Harvard. Sam also holds a LLB from University of Calabar (1992), BL from Nigerian Law School (1993), LLM from Harvard Law School (2001) and MPA from Harvard’s Kennedy School of Government (2003). He was the lead Consultant, Strategic Engagement with Actors in the South West and Southeast Regions organized by the Partnership to Engage, Reform and Learn (PERL), a project of the UK Department for International Development (DFID) October 2017, He was Chairman, Senate Technical Committee on Review of Competition and Consumer Protection Commission Bill February 2017 and Chairman, Senate Technical Committee on Review of Transportation Sector Reform Bill March- June 2017.

Dr Sam Amadi is a fellow of the Society of Project Management and Development Professionals International and also serves as a Member of Advisory Board.

He is happily married and blessed with children.